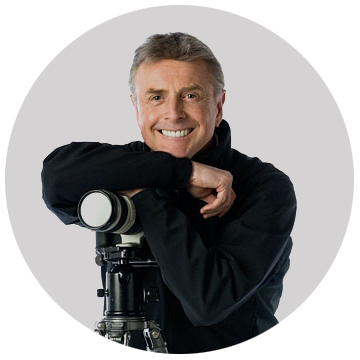 “Art Wolfe’s photographs are a superb evocation of some
of the most breathtaking spectacles in the world.” — Sir David Attenborough

Over the course of his 45-year career, photographer Art Wolfe has worked on every continent and in hundreds of locations. Wolfe’s photographs are recognized throughout the world for their mastery of color, composition and perspective. Wolfe’s photographic mission is multi-faceted: art, wildlife advocacy, education, and journalism inform his work.

Wolfe is the host of the award-winning television series Art Wolfe’s Travels to the Edge, an intimate and upbeat series that offers insights on nature, culture, and the realm of digital photography. It now airs worldwide. He was also featured in the 2015 Canon Australia/National Geographic Channel production Tales by Light.

Wolfe has released nearly 100 books; 2014 saw the release of his magnum opus “Earth Is My Witness”; this mega project features Wolfe’s favorite photos taken so far and is garnering international accolades and awards. In 2015 it was published by National Geographic in France and Germany. Witness is now a traveling exhibit in Europe.

Education is a major component of Wolfe’s work, whether it is about the environment or about photography.  He leads photographic tours worldwide as well as regularly giving his Photography as Art seminar.

Wolfe maintains his offices, stock agency, and production company in Seattle, Washington. His fine art work is available online at artwolfe.com and through the Rotella Galleries, located in Bellevue, Washington, and New York City.