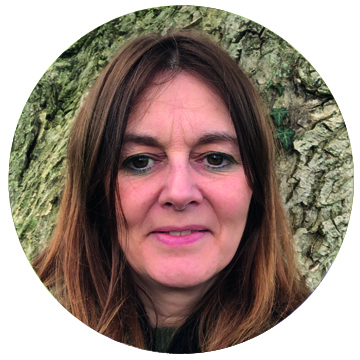 has her studio in Gloucestershire, UK. Over the years she has developed work in Barcelona, Malmo, Edinburgh and London which has enabled a flexible and adaptive approach to different media – she is particularly  known for her expressive approach to painting – and early on in her career she was mentored by the Swedish Imaginist printmaker Bertil Lundberg. He guided her away from the tyranny of the rational mind into a more intuitive approach. Her work has been written about by art historian Dr. Alan Wilkinson in the monograph A Tree Within, published by Sansom & Co and her paintings, drawings and prints have been exhibited in galleries and museums in the UK, France, Spain and Scandinavia, and recently in a major exhibition with The Arborealists at Collégiale Sainte-Croix de Loudun France.

McIntyre has a particular passion for trees that grow close to water and the duality of the tangible and obscure offered by the reflective qualities of water. She is also fascinated by the symbiotic relationship to water of Alder, Willow and Swamp Cypress trees and how this has been mythologised in the stories of our shared ancestors. Her drawings begin outdoors connecting directly to the landscape. Drawing is a very intimate process for the artist which can take many hours even days under the same tree and involves all the senses. This period of observational looking is rewarded by an enhanced perception of the tree in all its nuances of colour, movement, luminosity and abstracted patterns.

Studio paintings evolve from these outdoor experiences coupled with memory and imagination and are expressed in vivid chromatic oil colour of bold gestural brush marks. Her paintings have been described as building on the long tradition of British Romantic artists with an acute awareness of the vast global destruction of our forests and landscapes. In 2013 McIntyre  took part in the acclaimed Under the Greenwood: Picturing the British Tree, at St Barbe Museum & Art Gallery, Lymington, and became a founding member of The Arborealists art movement described as one of the most important new groups to surface in British contemporary art. Much as the 19th century visionary painters William Blake and Samuel Palmer reacted to the industrialisation and destruction of Britain’s landscape, McIntyre hopes that her voice as an artist will illuminate the fundamental importance of protecting our trees and forests.