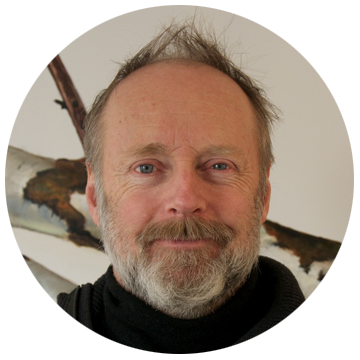 Julian Perry, was born in Worcester England and studied at Berkshire Collage of Art and Bristol Polytechnic. He enjoys an international reputation for his complex, finely crafted works which respond to the changing face of the British Landscape.

“Perry has a feel for in-between zones, for places where boundaries waver and enclaves are created. At a time of set aside he celebrates land use proper. He has painted allotments: patchworks of townie peasant practice, where (as David Jones could have observed ) the tiled plot is a direct quote from the Domesday Book. In his series of Viewing Point paintings he examined the Lee Valley Park, it’s saplings and water features, and brought out (most notably of all in Coppicing for Nightingales the tenuous but unavoidable , parallels to be drawn with the Zig-Zaging duckboards of the Western Front in the paintings by  Paul Nash, whose images of martyred trees and suppurating shell holes recur, modified only by sixty years of silting and tree growth, in Perry’s painting of a round pond set in a glade of newish trees. V-2 Rocket Crater Pond in Snow II is a painting of a war wound become an amenity, the great hole frozen over, and long blue shadows in show the colour of silence. In painting such as this there are , of course, Caspar David Friedrich connotations, note just the snow and the northernness, but the whole notion of saying it with trees, the call of the wild as it were.”