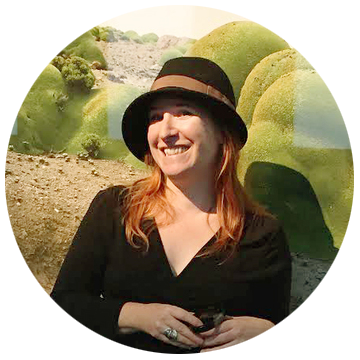 is a contemporary artist based in Brooklyn. She is currently developing new installation work deepening her explorations of personal and cosmic time, the universe, nature, philosophy, and beauty. She spent a decade developing the critically acclaimed project “The Oldest Living Things in the World,” for which she researches, works with biologists, and travels all over the world to photograph continuously living organisms 2000 years old and older. Stewart Brand calls her work “the missing science of biological longevity.” She’s received numerous awards including a 2014 Guggenheim Fellowship, has spoken at TED, The Long Now Foundation, and UCLA, amongst others, and appeared on the air on CNN, BBC, and various public radio programs. Her exhibition record spans more than a decade in museums and galleries in the US, Europe, the Middle East, and Asia, and her photographs and writing have been featured on global media outlets including The New York Times, Wall Street Journal, The Guardian, and NPR’s Picture Show. Jerry Saltz says of her work: “These stately pictures quiet the soul … Sussman brings you to the place where science, beauty, and eternity meet.”  Her first book was published in Spring 2014.