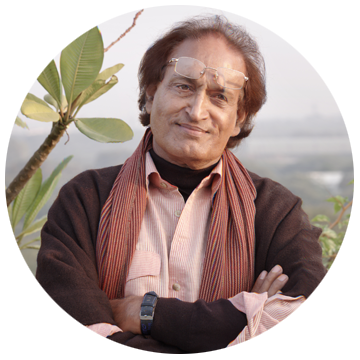 Raghu Rai (1942) a qualified civil engineer, began his career as a photographer at the age of 23 in 1965. In the early years of his career he was the chief photographer at The Statesman (1966 to 1976), and later the Picture Editor of Sunday magazine (1977 to 1980). Soon after completing the Thomson fellowship in England, he worked in The Times, London for four weeks within this short time span three half pages picture essays of his work were published with a byline. Recognizing his creative potential, Mr. Norman Hall, the illustrious editor of The Times offered him a job, but Raghu preferred to return to his own country to continue his creative journey in the lanes and by lanes of his motherland.

In 1971, impressed by his work in an exhibition at Gallery Delpire, Paris, the legendary photographer Henri Cartier Bresson nominated Raghu Rai to Magnum Photos, the world’s most prestigious photographer’s cooperative. Raghu continues to be part of this organization till date. Around the same time he was awarded the ‘Padmashree’ ( 1972), for the body of work he produced on the Bangladesh war, its impact on people and finally, the surrender. Rai became the Picture Editor—Visualiser—Photographer of India Today, India’s leading news magazine in its formative years. He worked on special issues and designs, contributing trail blazing picture essays on social, political and cultural themes (1982 to 1991). His series on Great Masters of Indian Classical Music, film maker Satyajit Ray, Mother Teresa, had become talking point of the magazine. In 1992 he was awarded “Photographer of the Year” in United States for the story “Human Management of Wildlife in India” published in National Geographic. In 2009 he was conferred Officere des Arts et des Lettres by Government of France.

Raghu Rai lives in New Delhi with his family and continues to be an associate of Magnum Photos.